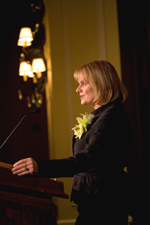 Massachusetts Appleseed and the national office of Appleseed presented the “Good Apple Award” to Lena G. Goldberg, Executive Vice President of Strategic Corporate Initiatives at Fidelity Investments, for her dedication to volunteerism and pro bono work.

“Lawyers have a special role to play in helping to address major issues facing our world today,” Goldberg said. “If we want our society to continue to flourish, we must ensure that the promise of a fair chance, the promise of transparent and predictable rules, the promise of a level playing field and a decent shot to succeed-that these promises are not promises alone. Through education, outreach, strategic planning, direct intervention and legal advocacy for appropriate legislation, Appleseed is helping to drive needed change.”

She has served her fellow professionals through various roles at the New England Legal Foundation, the Boston Bar Foundation, the Boston Bar Association, the Boston Lawyers Group, and the Morin Center for Banking and Financial Law of Boston University Law School. She has worked with several nonprofit organizations, including her role as a director of GEMs of Hope, an organization devoted to women’s advancement and micro-credit. She devoted particular time and energy for more than 15 years to D.A.R.E. Family Services, a nonprofit corporation providing foster care, mentor services, job training, adoption and other social services.

Claude G. Lancome, President of Board of Directors for the Massachusetts Appleseed and Executive Vice President, Principal and corporate counsel of Coast and Harbor Associates, was the emcee for the event, which had nearly 200 attendees and doubled its original fundraising goal of $100,000.